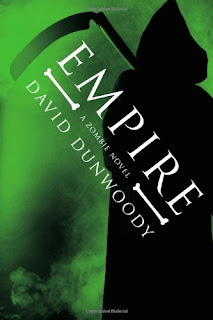 David Dunwoody, 2008, Permuted Press (Gallery Books ed. 2010)
Humanity stands on the edge of extinction, as the crippled US government and military begin to give up the century-long fight against the undead plague. But even as they do, the zombie hordes - born of an unholy mix of supernatural energy and man-made virus - suddenly find themselves up against an enemy whose touch they can no longer defy: Death himself. The Grim Reaper....

It's taken me a few years to get around to reading this reputed classic of the zomfic genre...and I'm delighted to find that reputation extremely well-deserved. The plot - which slowly coalesces through a series of at-first seemingly unconnected vignettes - is atmospheric and totally engrossing (not to mention refreshingly unique, offering a dark science-fantasy spin on the zompocalypse), with instantly empathic characters, great dialogue and prose, and an emotive and satisfying conclusion.

Empire is absolutely a novel for any zomfan who appreciates strong literary fiction and creativity within the genre. A truly great read.
Posted by Chuck McKenzie at 4:28 PM 1 comment: