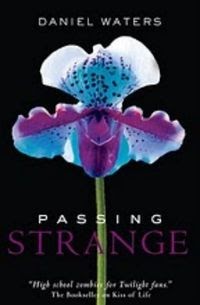 Karen DeSonne always passed as a normal teenager. And now that she's dead, she's still passing - this time, as alive. But when her dead friends are accused of a high profile murder and forced into hiding, it's up to Karen to prove their innocence. Which means doing the unthinkable, and becoming the girlfriend of bionist zealot Pete Martinsburg, who she suspects of framing them. But if Pete finds out who - and what - Karen really is, the consequences could be far worse than death...

Passing Strange is the third in Daniel Waters' series of YA zombie-themed books - beginning with Generation Dead and Kiss of Life - and is an absolute cracker, building on all that has gone before, and upping the ante as the plot races towards what might well be the conclusion of the trilogy. The change, from previous installments, from a living third-person viewpoint character to a dead first-person POV, provides a great deal of uncertainty as to where the narrative might be heading, and - for all that the book is aimed at a YA readership - Waters certainly doesn't shy away from addressing some extremely dark themes, such as religious, racial and sexual bigotry, human rights abuses, and the nature of hatred and fear in general.

Passing Strange is an excellent addition to an excellent series; a truly gripping read, and one that can be enjoyed equally by teens and adults. A brilliant addition to the 'zombies as the disenfranchised' subgenre.
Posted by Chuck McKenzie at 12:44 PM No comments: