Review: Hungry For Your Love 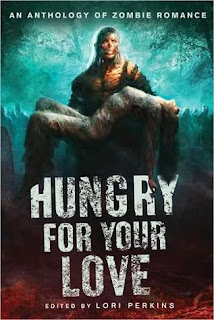 Even as someone who has been quite vocal in championing la difference in zomfic, as a means of keeping the genre continually fresh and entertaining, I've never been totally comfortable with the whole zombie/romance crossover concept. It always seemed to me that, once you move past the basic idea of a human/human romance perhaps set against the backdrop of a zompocalypse (as in Amelia Beamer's The Loving Dead), then you're potentially entering either fluffy-bunny or major 'ick!' territory, neither of which floats my boat, particularly.

That said, Lori Perkins' excellent anthology, Hungry For Your Love, has pretty-much forced me to change my thinking on this point. Comprising twenty-one zombie-related tales that range all the way across the romantic spectrum - from pure Mills & Boon stuff to, as Perkins herself puts it, 'smut' - there is literally something here for everyone. The zombies, also, run the gamut, from humorous to genuinely horrifying, voodoo to Romero-esque. Such is the variety offered - almost every individual story claiming its own niche somewhere along the available spectrum - that it's pointless for me to pick out any favourites; suffice to say, this is one of the best zombie 'crossover' titles I've come across in a while, and well worth reading.
Posted by Chuck McKenzie at 5:52 PM No comments: